Two Topic Commentary: Weekly Earnings - How Are Your States and Counties Stacking Up? And Pension Obligations and Liabilities

This week we cover two topics – Weekly Earnings, looking at the haves and have nots, and Pension Obligations and Liabilities. Alex Pendolino guides us through the Weekly Earnings with insightful analysis. We then offer a few quotes and a link to a commentary prepared by John Mauldin.

Weekly Earnings – How are Your States and Counties Stacking Up?

As we embrace Spring and head toward the Summer, most of us will take a break from the day-to-day and spend some money on a well-earned vacation, which leads to our initial subject for this week, where we take a closer look at wages as reported by the Bureau of Labor Statistics (“BLS”).

On April 18, 2017, the BLS released the “Usual Weekly Earnings of Wage and Salary Workers” for the first quarter of 2017. The takeaway number from this report is 4.2%. The release indicates that the full-time, median weekly earnings were 4.2% higher for workers than this time a year ago. Overall, this is very positive for the economy, as more people are seeing wages grow while reported inflation (yes, Gregg is skeptical given what the government reported number excludes) seemingly remains in check.  Importantly, this data point is based on a broad look of the nation. As with all data points, it is important to see how the States and Counties across the country stack up against the national average (+4.2%) increase in median weekly earnings.

How Are the States Stacking Up?

Below we highlight States with robust growth in wages compared to the national median. We look beyond the 4.2% average and identify those States with a greater than 6% average weekly wage increase for the period Q3 2015 to Q3 2016 (the most recent State level data available). As the chart below indicates, 17 States meet this criterion. 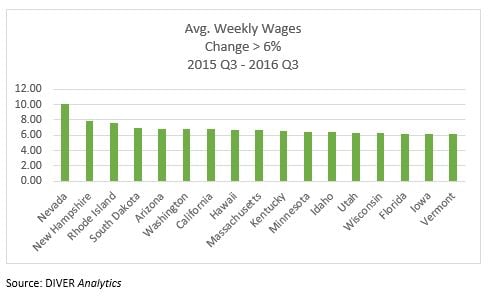 Looking at the other side of the median increase, below we identify the ten States with average weekly wage changes of less than 4.2%. 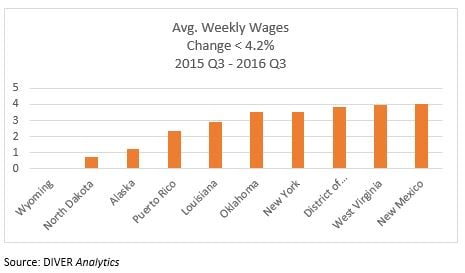 Moreover, as highlighted below, the good news is that the vast majority of States (and territories) are outperforming the national average while about 20% fall short.

A Quick Look at the County Level

Looking to the county level, the table below highlights that a slimmer majority of counties are performing at, or above, the national average increase in median weekly earnings (+4.2%). More specifically, almost 56% of counties exceed the national increase while just over 44% fall short.

Finally, while listing every county would be too lengthy for the purposes of this article, I thought it would be useful to look at the top performing counties versus the bottom performing counties as highlighted in the two tables below. DIVER Analytics users can use the Filter tool to go much deeper to compare counties of interest. 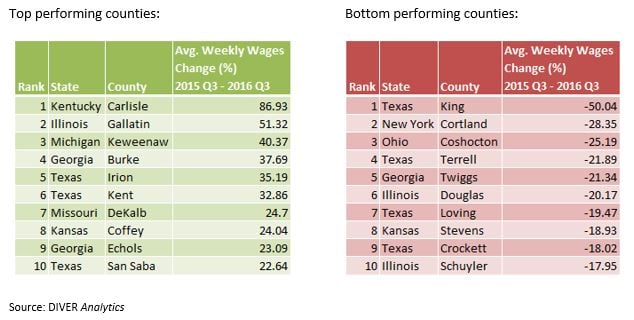 Periodically, pension obligations and liabilities become a hot topic of discussion among market participants. Seemingly, it rears its head, we hear about some changes made to plans, and it falls to the backburner, to be revisited another day. In the past, we have written on the subject and pointed to what we believed to be unrealistic assumed rates of return and funded ratios on a steep decline, as well as the use of pension obligation bonds (“unproductive debt”).  This past week, we read John Mauldin’s Thoughts from the Frontline publication and were reminded of the looming and unaddressed issue we face when it comes to pension obligations. A couple of salient quotes, and then the link to Mr. Mauldin’s “Angst in America, Part 5: The Crisis We Can't Muddle Through.” While Mr. Mauldin’s article is a bit longer than our usual commentary, we encourage you to read the full post.

First, a few quotes to whet your whistle:

And, finally, here is the link to Mr. Mauldin’s full commentary.

http://www.mauldineconomics.com/frontlinethoughts Thoughts from the Frontline, Angst in America, Part 5: The Crisis We Can’t Muddle Through, April 23, 2017.