This week we look at the recently released MSRB report regarding disclosure filings and offer some facts and observations.  We also look at those obligors that might be impacted should the Oroville Dam fail.

Last week, the MSRB released its “Timing of Annual Financial Disclosures by Issuers of Municipal Securities” report, an update of their prior report on the subject. The report “benchmarks the average timing of submissions of the financial information against the timing by which issuers and obligated persons have agreed to provide their annual financial and operating disclosures under their continuing disclosure agreements.”  So what did we learn? Not much has changed when it comes to the timing of these filings.  A look at what the MSRB report tells us:


The report slices and dices the data in several different ways – most of which is known to those that operate in the muni space (by sector and source of repayment) and some of which has questionable utility (month filed).[1]

What is interesting (and not entirely congruous with the idea of more timely disclosure) is that the CDA commitment periods have extended out.  According to the MSRB Report, over the last five years CDA commitment dates of 180 days have declined, while the 270-day commitment has increased (in the chart below, from the MSRB Report, the 240 day period - the third highest set of bars - should be swapped with the 210 period for proper visual display).  From a 15c2-12 perspective, this may help certain filers that were late in meeting their requirements that now say they are filing timely.  On the other hand, maybe not. If an obligated party has a filing requirement for an outstanding issue (Deal A) that is less than their most recent deal (Deal B), at least regarding Deal A, the obligated party still needs to meet the more stringent filing requirement.

As far as more timely audits, financial and operating data to the market, information which would be more beneficial to our market, the results tell us that not much has changed for the better.

If you care more about how close audited data is released from the end of the fiscal year (arguably important from an analytical perspective), the CAFRs filing map offers a quick glimpse of the States by bucket.

The Oroville Dam situation  caused the evacuation of some 188,000 people from Butte, Yuba and Sutter counties.  Politics aside, perhaps the Army Corps of Engineers can build a wall to protect these folks -- couldn’t resist. Beyond the obvious concern for those potentially in harm’s way, there are several obligated parties, other than the noted counties, that may be at risk:

The map below, courtesy of mapsofworld.com, provides a perspective of surrounding areas. 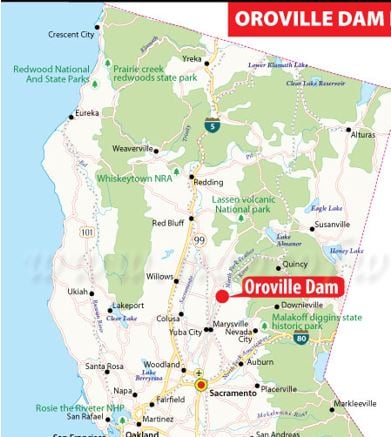 Here’s to hoping the rains slow down and the repairs speed up.

[1] To be clear, the MSRB does an outstanding job when it comes to creating and updating rules and providing guidance around the rules that govern the municipal market. They provide expertise, leverage industry experts from all parts of the market (as evidenced by the construct of the Board) and do an excellent job attempting to educate our market. They also did a tremendous service to the market by creating EMMA as a repository for critical market data. A sea change from the pre-EMMA days.