The Unequal Impacts of Trump's Tariffs

This week we take a closer look at President Trump’s recent imposition of tariffs and the potential impact on exporting states and key industries.

On Thursday, March 8, President Trump signed proclamations imposing a 25% tariff on steel and a 10% tariff on aluminum which, at least temporarily, exempted NAFTA partners Canada and Mexico. The tariffs are slated to begin 15 days from the signing. This action by President Trump follows his campaign promises to implement a more protectionist trading regime (or put America first – political perspective dependent), a topic Lumesis’ Eli Molin explored just prior to the President’s inauguration. As the administration implements these tariffs and continues to renegotiate NAFTA , we will update Eli’s piece with new data and a refined focus as the specificity of the tariffs become more apparent.

First, we look at the steel import landscape in the United States. Given all the rhetoric around partners taking advantage of America, the data is a bit surprising. 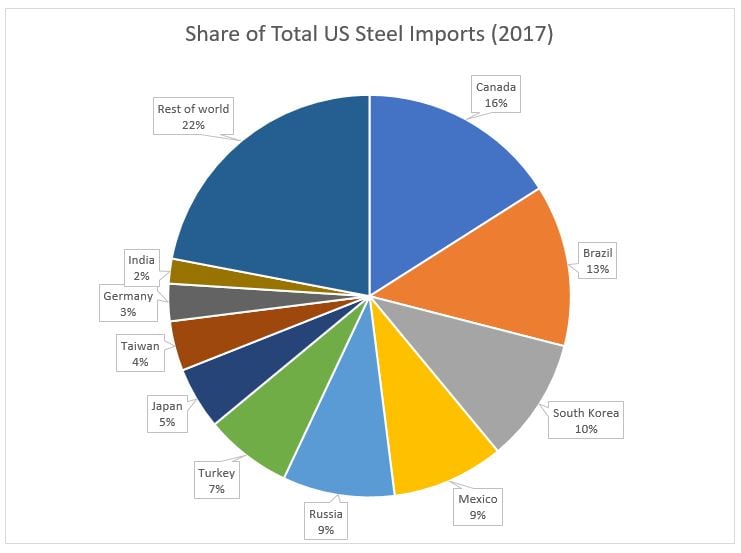 While Chinese steel accounted for nearly half of the global supply in 2016, Chinese steel imports to the United States fell 5 percent in 2017, placing them 11th on the steel importer list – less than 2%. On the campaign trail, President Trump spent considerable time railing against trade imbalances with China, but these steel and aluminum tariffs will affect allies Brazil and South Korea the most (assuming current exemptions are maintained).

An additional data point highlights the complexity of global trading. Several of the largest exporters of steel to the United States (those subject to the new tariff) are among the largest importers of American coal, a key input in the production of steel. President Trump has made a revival of the coal industry a visible priority. Tariffs that make foreign steel more expensive, and thus less attractive to American consumers, could result in a decline of American coal exports to those same countries.  Moreover, might these countries impose a retaliatory tariff? 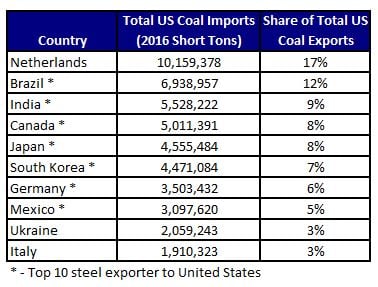 Among the top ten recipients of American coal imports, seven of those countries are in the top ten steel importers to the United States (those with the asterisk above). The five largest coal producing states accounted for 70% of total US 2016 production – Wyoming 41%; West Virginia 11%; Pennsylvania 6%; Illinois 6%; and Kentucky 6%. Of those five States, Illinois was the only one to not go to President Trump in the 2016 election. Roughly 92% of US produced coal was used domestically in 2016, meaning a steep drop in foreign demand for coal would be noticeable but that it could possibly be offset by increased domestic steel making demand.

There is plenty of political maneuvering yet to happen, including the possibility of further country exemptions (which would raise the tariff on non-exempt countries). South Korea is threatening a World Trade Organization complaint if they are not exempted from the tariffs, retaliatory tariffs are on the horizon, and the mobilization of considerable domestic opposition has begun. The European Union is already postulating politically sensitive tariffs that target Republican leadership’s districts and Presidential election swing states. As it currently stands, the domestic steel and aluminum industries stand to benefit while industries that are consumers of steel and aluminum – everything from construction to vehicles to beer cans – can expect higher prices for their raw materials. It is important to consider these tariffs in context of the broader United States economy; the steel industry employs about 140,000 people in the United States, which is roughly equal to the number of Boeing employees worldwide. The tariffs will be a boon to steel and aluminum manufacturers, but may drive up the cost of business for a host of ancillary industries, including for the 1.6 million people working in transportation equipment manufacturing.

With retaliatory tariffs a real possibility, it is worth looking at States that may be the most affected if their goods become more expensive in foreign markets. 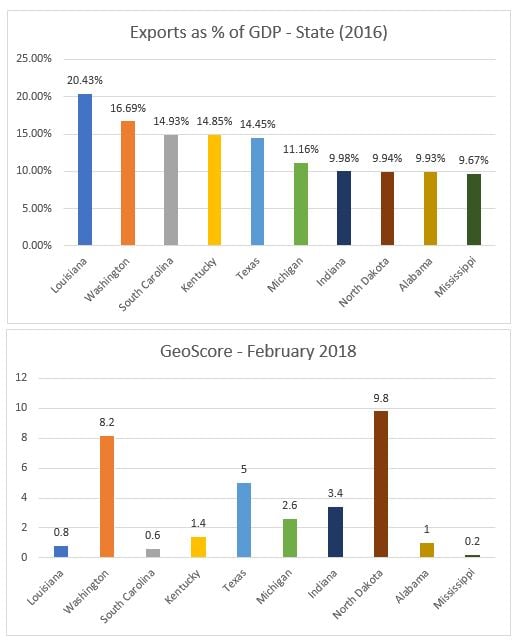 It is worth noting that nine out of the ten States with the highest share of exports as a % of GDP voted for President Trump in the 2016 election. The sole State to cast its electoral votes for Hillary Clinton – Washington – is second only to North Dakota in Geo Scores for this group, perhaps indicating its relatively stronger ability than most to weather a trade war. Of the nine States that voted for President Trump and have economies with heightened exposure to foreign tariff actions, only one – North Dakota – has a GeoScore in the top half of our relative State ranking.

Looking a little deeper into those States, we see a pattern among the largest recipient of their exports.

Canada, China, and Mexico top the list, with Canada being the top recipient of exports from six of the top 10 States of exports as a percentage of state GDP. A renegotiation of NAFTA is in the works leaving States with large exposure to China to have more cause for worry in the short term, including the top three States in the above list: Louisiana, Washington, and South Carolina. While a NAFTA renegotiation appears likely, its specifics are unclear, leaving many of the States most concentrating in exports with an uncertain road ahead.

While we wait to see the ultimate domino effect of these tariffs, even conservative economists have been sounding the alarms. Many of the States that rely most on exporting goods are part of the President’s base. Additionally, some of the President’s core constituent industries of coal and manufacturing will likely face decreased demand and increased material prices, respectively. While the economy has been humming recently, with solid employment and wage reports, protectionist measures such as this will make it that much more difficult to achieve the administration’s target of 3% annual GDP growth.