A Terrible, Horrible, No Good Rule? And, States On The Move

This week we bring you the February 2017 DIVER Geo Scores and, in case you missed it, some interesting news and a quote around the Labor Department’s Fiduciary Rule. Last month, a reader requested that we provide, in addition to the locations with the greatest moves, the top and bottom States, counties and cities. Given our limited space, we refer you to our website for that data.

DIVER Geo Scores are designed to communicate the overall economic health of a selected geographic area on a scale of 0 to 10. The Geo Score reflects the relative economic well-being of the location and is available for all States, counties, and approximately 350 of the largest cities. Calculations are released monthly and are based on multiple, meaningful economic and demographic data from the employment, income and housing categories.

Most people are aware that The Labor Department proposed a 60-day postponement of the implementation of its Fiduciary Rule, pending direction from the Trump Administration. The proposed delay will "allow the new administration an opportunity to review the rule's impact on investors and the market, while providing firms additional time to prepare for potential changes to the rule," SIFMA President and CEO Kenneth Bentsen Jr said. If the SEC’s view has any relevance, one can surmise that the DOL’s Fiduciary Rule is DOA. As reported by the Investment News, acting SEC Chairman Michael Piwowar “blasted the Department of Labor's fiduciary rule and showed skepticism about the SEC advancing its own regulation to raise investment-advice standards. Mr. Piwowar did not mince words regarding his opposition to the DOL measure. "I think it is a terrible, horrible, no good, very bad rule," Mr. Piwowar said on Thursday at the Investment Adviser Association compliance conference in Washington. "For me, that rule was never about investor protection. It was about enabling trial lawyers to increase profits." Enough said.

The tables below highlight those States with the largest positive and negative moves. For the top ten States that had the most significant increases in their Geo Scores, all but Florida and Nevada saw improvement in their employment situation, while all saw an improvement in wages and a decline in poverty. Housing prices also were a net positive for these top-mover States. Bottom movers at the State level, including Oklahoma and Pennsylvania, saw relatively more meaningful declines in employment while Wyoming saw the biggest hit to wages. The good news for these States is that, despite seeing declines in their Geo Score, all saw stable to moderately rising housing prices.

Below we take a closer look at housing prices, a factor considered in our Geo Score, that was recently updated by the FHFA. The good news is that the majority of States have seen an increase in housing prices, with only four showing any deterioration since the fourth quarter of 2015. The concern, dare we say, is the beginning of a housing bubble. Time will tell but this is a data point certainly worth watching for both declines but also “irrational exuberance” on the upside. 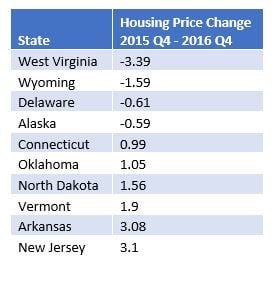 At the County level, those with the largest increases in their Geo Scores saw marked improvement in wages and housing prices, while counties with the largest decreases in their Geo Scores saw choppy employment changes (most being negative) and marginal, if any, wage increases. Interestingly, all saw an increase in foreclosures while, at the same time, seeing an increase in housing prices. These two factors generally move in the same direction. This divergence in housing prices and foreclosures is worth keeping an eye on.

We do not see a State level over-concentration in those counties with an increase or decrease in their Geo Score. This further highlights the importance of looking at areas at a more granular level as opposed to lumping municipalities based on broader geography.

At the city level, the top Geo Score gainers saw marked improvement in wages and housing data with solid employment gains as well. Cities with the most pronounced decline in Geo Scores saw deteriorating employment data and higher levels of foreclosures. Like the counties, we again see a divergence in housing prices (all with the most pronounced declines in Geo Scores seeing housing price increases) and foreclosures. Our antennae are on alert.