This week we look at how State GDP (and therefore employment and tax receipts) may be impacted should certain campaign promises be kept.  As we prepare for the inauguration of President-Elect Donald Trump, thankfully we have been spared “fighting in the streets.”[1]  However, municipal market participants are bracing for uncertainty as the Trump administration and the newly elected Congress begin the process of implementing policy ideas promised during the campaign such as repealing the Affordable Care Act and increasing infrastructure spending.

Among other areas, President-Elect Trump and Congress will consider is the cancellation and/or renegotiation of trade deals such as NAFTA, the Trans-Pacific Partnership and the changing of trade policies with countries such as China and Mexico.  As it relates to trade, the question is will ‘the world look just the same,’[2] or will there be a radical change from previous trade policies?

States that rely heavily on exports to foreign countries, which we define as greater than 10% of their GDP, are worth a closer look as the new administration considers its next steps on its promise to change trade policy.  Below, we identify the ten States that rely most heavily on exports as a percentage of their GDP for 2015 (the last year for which data is available).  For each State, we also identify their top three foreign trading partners and each State’s Geo Score, our proprietary measurement of economic well-being.

The chart above highlights some interesting facts:

Assuming some change in trade deals that impact imports and exports, the question is what impact such changes will have on those States with a relatively high portion of their GDP coming from exports to countries such as China and Mexico (countries where there has been outward hostility unlike with our neighbor to the north, Canada).  What will be the impact, if any, on tax receipts and employment?

Several data points are worth considering, such as largest State employers and GDP breakdown by industry (for DIVER Analytics clients, we suggest a look at the Search Module by State to access this data).  By way of example, below we highlight the largest employers in Michigan and Texas, two States that have China and Mexico in their top three export partners.  What might the impact be on these employers should there be a change in trade policy? 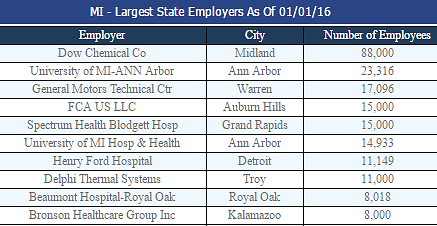 It is also worth looking at the States most reliant on exports in relation to our proprietary Geo Score for each State. As the chart on the prior page provides, certain States such as Washington (6.4) and Vermont (9.4) have relatively strong economies and rely heavily on exports to power their economies. If President-Elect Trump follows through on his promise to alter current trade agreements those two States may experience a larger relative decline in their economic health.  Will Washington’s economic health decline significantly due to less trade with China?  Will Vermont be able to maintain its relatively strong economy since they are trading with countries largely ignored by Mr. Trump during the campaign?

Moving on to States with relatively weak Geo Scores that are heavily reliant on exports such as Mississippi (0.2), Louisiana (0.6), South Carolina (1.6), and Kentucky (1.8).  What will change in trade policy bring to them?  Will their already relatively poor economies suffer more?  Or do these States see change in trade policy as having a marginal impact or potentially a good thing?  As new policies are implemented, these are some of the questions municipal bond investors must consider during a period of uncertainty.  Will President-Elect Trump follow through on his campaign promises to alter trade policy?  What will be the effects on a federal, State, and local level to changes in trade policy? Or will “nothing in the streets look any different to me[3].”