According to the DIVER Geo Scores from Lumesis, the employment situation continues to be the top story across all States.  This month, we take a closer look at unemployment and labor force participation as well as touch on foreclosures.

DIVER Geo Scores are designed to quickly communicate the overall economic health of a selected geographic area on a scale of 0 to 10. The Geo Score reflects the relative economic well-being of the location and is available for all States, counties, and approximately 350 of the largest cities. Calculations are released monthly and are based on multiple, meaningful economic and demographic data from the employment, income and housing categories.Top and Bottom State Level Geo Score for October 2018

Below are the top and bottom ten States ranked by their Geo Scores for October 2018. For a full list of all states and their respective scores, visit our website.

Amongst bottom movers, six of ten States saw a decline the Unemployment Rate with six of ten States seeing their Labor Force Participation Rate rise.  Importantly, bottom movers Alaska, Montana and Arkansas saw solid employment data – lower unemployment and flat or increasing labor force participation.  On a relative basis, several of the States with the Geo Scores with the greatest decline still have solid unemployment data – nine of ten are below 5%.  The question to revisit is the absolute Labor force Participation Rate.   In the housing market, Alaska and Nevada saw increases in foreclosures while all top Geo Score movers were flat or saw a decline in the Foreclosure Rate. 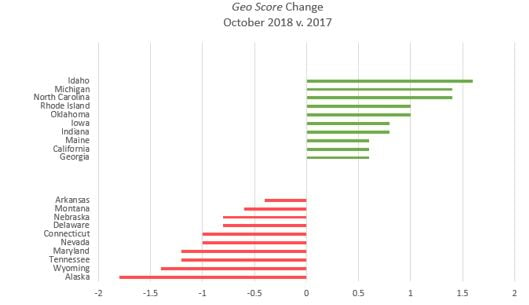 Below are the top and bottom 25 counties ranked by their Geo Scores for October 2018. For a full list of all counties and their respective scores, visit our website.

At the bottom end of the scale, the majority of counties in this category saw an increase in their Unemployment Rate with Rolette County ND and Marshall County IA having rate increases of 3.6% and 2%, respectively, with eight others seeing increased rates of more than 1%.  Labor Force Participation was improved in only six of the bottom mover counties. 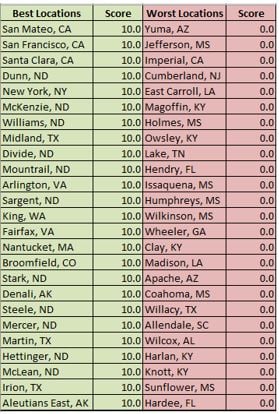 DIVER Geo Scores at the City/Town level reflect many of the same trends mentioned above. Specifically, most of those that show declining Geo Scores year-over-year have experienced increasing unemployment, poverty rates and foreclosures. Boulder CO, Johnson TN, Knoxville TN and Yakima WA all showed higher unemployment by more than 1% versus 12 months ago.

Not surprisingly, top performing cities and towns showed increases in employment. California had the most cities that were top performers last month with eight ranked in the top 25. Fresno CA had a declining Unemployment Rate (-2.1%), followed by Hayward CA (-2.0%), Riverside CA  (1.6%), Yuba City CA (-1.4%) and Thousand Oaks CA (-1.4%). Michigan was next with three top performing cities including Ann Arbor and Kalamazoo. 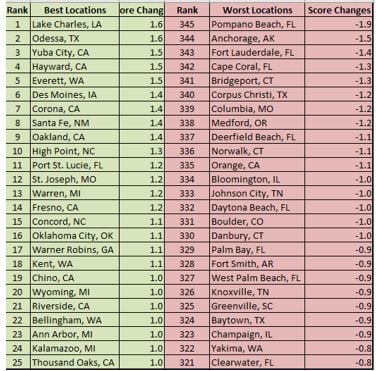