Before getting started, we here at Lumesis send our thoughts and prayers to those impacted by Harvey. This week we bring you the August 2017 DIVER Geo Scores and a look at the SEC’s Beaumont Order.

The tables below highlight those States with the most meaningful moves (positive and negative) year on year. For the top States that had the most significant increases in their Geo Scores, the focus is on the top 12 (there was a tie at +0.4 among five States). Of our top 12, all saw improvement in their employment pictures, with declining unemployment and flat to higher labor force participation. All but Iowa saw improvement in the poverty rate and all saw continued improvement in housing on the foreclosure side, as well as housing prices. 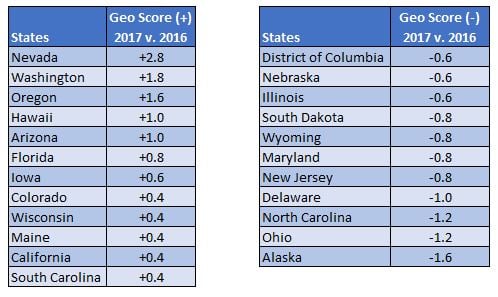 For bottom movers at the State level, our focus is the bottom 11 (similar to top movers, there were three that saw their Geo Score decline by 0.6). We start with the fact that DC saw a significant decline – could this be because Congress was out of town for part of the month? Seriously, of the bottom 11, the news is not all that bad. About half of the States saw a decline in unemployment and nine saw a decline in the poverty rate (too early to assess the same against wages, as that data is not due for another month). As noted in prior months, despite seeing declines in their Geo Score, all saw rising housing prices. Not to beat a dead horse but I continue to be very concerned that housing prices are frothy (see last month’s Geo Score commentary and Matthew Flynn’s commentary from two weeks back).

At the county level, most top Geo Score increases year on year saw improvements in unemployment data, with the exception of Yakutat, AK. All but Lincoln, ID and Yakutat, AK saw flat to increasing labor force participation. All counties saw improving housing data and seven of ten saw improvement in their poverty data.

At the City level, all cities with the greatest increase in their Geo Score year on year saw a decline in their unemployment rate and all but Warren, MI saw stable to increasing labor force participation. All saw improved housing conditions and all but Medford, OR saw an improvement in their poverty rate. Again, until we see updated wage data I am not going to get too excited about the poverty number. Of note in the city data is the presence of Las Vegas and Henderson, NV. With Nevada a top State mover, the presence of these cities is not a surprise.

For cities with the greatest declines, Texas (again) dominates our bottom movers with four of ten. All but DC and North Little Rock saw a declining labor force. Troubling for DC was the increase in the unemployment rate despite the flat labor force number. On the housing side, all of our bottom ten saw an increase in the foreclosure rate but (and here I go again) all saw an increase in housing prices. In fact, of our bottom 25 movers, all but four saw increasing housing prices.

Thanks to Jane Ma and Julie Wen for all their work on the Geo Scores.

Issuer and Underwriter Taken to Task

Dissemination Agent Alone Not the Answer

While many would prefer the SEC’s MCDC Initiative be a distant memory, on August 23, the SEC’s Chief of the Enforcement Division’s Public Finance Abuse Unit reminded issuers and underwriters alike that “[i]ssuers and underwriters will continue to be held accountable when they fail to provide investors with an accurate picture of past compliance with continuing disclosure obligations.” SEC Press Release, Muni Bond Issuer and Underwriter Charged With Disclosure Failure, 8/23/2017.

In an Order Instituting Cease and Desist Proceedings, Making Findings and Imposing Sanctions and a Cease and Desist Order (“Order”) https://www.sec.gov/litigation/admin/2017/33-10406.pdf, the SEC followed through on its commitment to focus on market participants that had not voluntarily self-reported under the MCDC initiative. The SEC’s press release https://www.sec.gov/news/press-release/2017-148 highlighted that the Municipal Finance Authority in Beaumont, California (“Beaumont”), its then-executive director and the underwriting firm behind certain offerings had settled charges that Beaumont had made false statements about compliance with continuing disclosure obligations and the underwriter failed to conduct reasonable diligence.

This Order (and the O’Connor Order https://www.sec.gov/litigation/admin/2017/33-10405.pdf) demonstrate that the SEC is not done focusing on disclosure by issuers and diligence by underwriters and that the penalties for parties that did not voluntarily self-report under MCDC will be more severe.

In its Legal Discussion, the Order set forth the legal basis for holding the issuer accountable and, as emphasized below, noted that “negligence is sufficient to establish violations.” The Order provided, in part:

The SEC held the issuer, the City Manager and the underwriter accountable and, in each instance, imposed “undertakings” well beyond what was required of those that submitted and settled with the SEC under its MCDC initiative.

For issuers and their officials, there are several takeaways from these Orders that are beyond what was required by those that voluntarily submitted and were subject to Orders under the MCDC initiative:

There is another message that shouldn’t be overlooked. Accountability seemingly begins and ends with the issuer and underwriter even where, as in Beaumont, a dissemination agent was engaged by the issuer. A review of outstanding Official Statements shows Beaumont engaged a dissemination agent. While the Order does not discuss the role of the dissemination agent, it does highlight missed and late filings, the failure of the district to properly disclose the same and the fact that the Executive Director was responsible for reviewing and approving the content of the OS.

What’s an issuer and obligated party to do? As highlighted in our May 25, 2017 commentary and below, the MCDC Issuer Cease and Desist Orders (“MCDC Orders”) and the GFOA’s August 24, 2016 Alert to Members (“GFOA Alert”) provide excellent starting points. In addition, the engagement of an independent third party to review CDA obligations and actual filings can be a critical part of your policies, procedures and practices. Having the party responsible for making the filings (be they an employee of the obligated party or a dissemination agent) conduct such a review puts that party in the awkward position of self-reporting their own failures where a filing is late or missed and, as some have opined, might be considered a conflict of interest.

The MCDC Orders, in part, require issuers to:

The GFOA Alert provided “essential practices” that, combined with the SEC Orders, can serve as best practices for Issuers. It provides, in part:

As issuers and obligated parties digest the Beaumont Order in conjunction with the MCDC Orders and their obligations under 17(a)(2), it is prudent they contemplate a Disclosure Management policy and practice to ensure an understanding of filing obligations, an understanding of what has or has not been filed properly and a process to be alerted of current filing obligations. Any Disclosure Management policy and practice should include an independent review to confirm filings are done properly.